Everyone has a quarter machine memory.

Whether it’s a scratching panther tattoo, winking cat sticker or plastic homie, there is no doubt you haven’t begged your parents for two silver-plated George Washingtons, jammed them into two steel-plated slots and pulled out a new treasure stuck between two pieces of white cardboard.

But my mind was always abducted by the metallic alien head sticker. Matter of fact, the black alien head.

There was a conspiracy theory among the youth in my hometown claiming the sticker wasn’t even in the machine other than the display. I say this because you never saw it on anyone's trapper keeper. And, let’s be honest, if it wasn’t on your trapper keeper, no one was gonna believe you.

I swear, every time I went into my neighborhood Round Table on Combie Road, the black alien head sticker would speak to me from its quarter machine throne. “Go ahead...you’ll never get me…so on and so on.”

So here is how it went, believe it or not.

I don’t remember the date, all I can say it was 1997 and everyone was afraid that Comet Hale–Bopp was going to hit the earth.

I was with a childhood friend, we got our quarters and strutted over the sticker machine.

He went first. Both quarters slid into place. Clink click. A hard push. A two-handed pull, and out slid a cardboard envelope. He opened it to unveil a white alien head sticker. Not bad.

My turn. I felt there was no chance, so I was opting towards a dragon or flaming eightball temporary tattoo. But I was also kinda convinced that I had better odds since my friend had gone first.

So there I went, attempt number who knows what. Dropped in the quarters. Clink click. A hard push. A two-handed pull, and out slid a cardboard envelope.

I opened the flap to expose...nothing. Blank paper.

It was the back.

I quickly flipped it over, and it was as if I were Charlie Bucket and area 51 had just screwed up and exposed everything they knew about aliens. There it was. THE BLACK ALIEN HEAD STICKER.

We both stood there in shock.

So what did I do?

I walked directly over to the jukebox and start pretending I was going to put it in the dollar slot, each time getting closer and closer.

And like a posh oyster-slurping human, down the hatch it went.

I started kicking and punching the jukebox, channeling my inner Fonzie. I smashed the return button but nothing was happening…so my friend decided to take it upon himself to select a random song. Two clicks and Spiderwebs by No Doubt started blasting throughout the Round Table.

I sprinted to the counter and told the gentleman that I had gotten the black alien head sticker and accidently put it in the dollar slot of the jukebox.

He opened the jukebox to reveal...nothing. Just the guts of a jukebox and some cash and that was it. It was gone...

...But after twenty years some things just find their way back into your life. Strange. 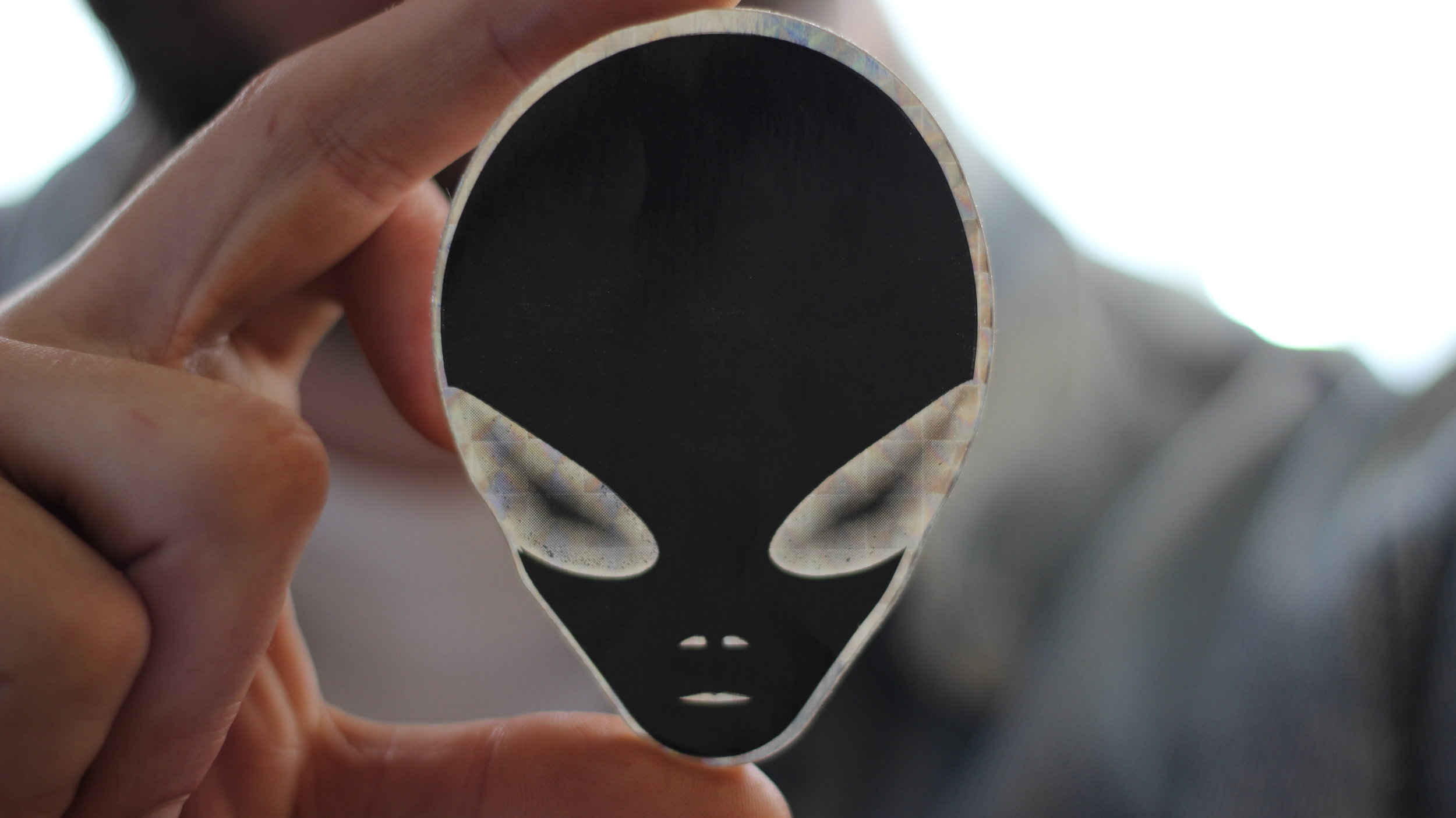